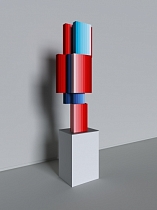 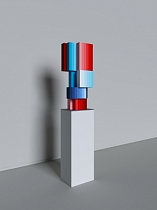 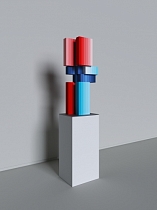 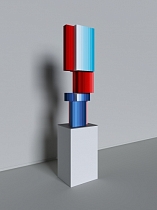 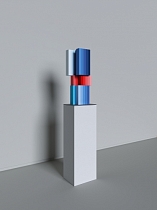 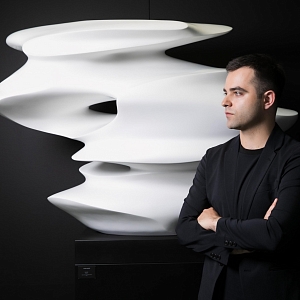 Following the achievements of modern humanitarian and urban studies concerning the understanding of space, Daniel refuses to consider space as a container filled with different objects. On the contrary, space is understood as a field saturated with the interaction of different forces. The sculpture is not just an independent object, but a result of these forces actions, and it subsequently organizes the space around itself.

Daniel Zakh works completely different compared to the traditional method of work, where the sculptor moves from the concept directly to the action with the material. Daniel begins the creation of a sculptural object with a description of the logic of the forces that form the unique character of the sculpture. This approach often leads to unexpected results. The creative process passes from the dimension of direct interaction with the form to the dimension of algorithmic formation.

A series of sculptures INFLOW reflect the result of stimulated influence of forces on matter, imitating the shape of the rocks of the desert Ah-Shi-Sle-Pah (USA) or the White Desert (Egypt), which were formed over millions of years by nature itself.

Refusing the idea of formation in real space provides an opportunity for the sculptor to set a unique set of forces and reproduce the processes that would take centuries in real life and nature. The sculptor creates his own universe, in which there is a matter and forces acting on it.

"Thinking about this series of sculptures, I imagine a cube of material that has experienced a relentless flow of forces. Following a set of spatial trajectories, such a flow begins to grind off the mass of the cube gradually, rid it of unnecessary elements and to show the sculpture"(Daniel Zakh).

ELASTIC LIMIT - the series of wall sculptures resembling sand dunes with its plane unrolled to the viewer.

In this series of works Zakh continues reflecting on the physics of forces that meet matter on their way and lead to different degrees of its compression and stretching. The scale of the work allows the viewer to immerse into the space of non-relentless deformations and to feel the displacement of matter within one object. An abstract art of Gerhard Richter, with his signature "rubbed" strokes of paint served as aesthetic inspiration for the sculptor in this series.

“What really attracted in the works of Gerhard Richter is the constantly increasing intensity and density of events in the limited space of the canvas. As for me as a sculptor the main material is space, I am interested of the idea of a three-dimensional response to Richter's abstraction ”(Daniel Zach).

Daniel Zakh graduated from the Zaha Hadid Studio at the Vienna University of Applied Arts (Austria) with distinction. Afterwards he worked for a year in Zaha Hadid Architects (London, UK). Realizing that the work in a prestigious but large corporation does not give an opportunity to create art, Daniel returned to Russia, where he has begun to work on his first independent projects, developing his teacher’s, architect Zaha Hadid, aesthetic search.