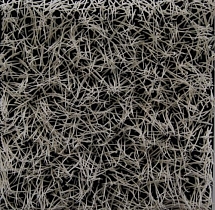 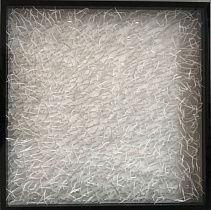 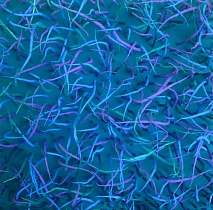 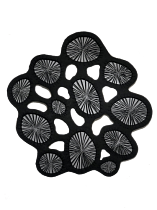 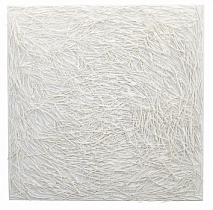 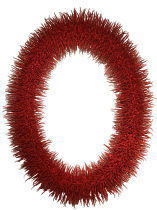 Gleb Skubachevsky was born in Moscow in 1989. He acquired an excellent academic education by studying in Aidan Salakhova’s and Sergey Ossovsky’s studio in the V. Surikov Moscow State Art Institute.

At the Marat Gelman’s DEAC residence in Montenegro Skubachevsky has developed his recognizable technique, which he has been using for the last few years. It is a mixture of different materials, primarily paper, on canvas.

Skubachevsky’ s art is on the interssection of painting, sculpture and design. The author is constantly searching for new creative ideas, developing techniques and experimenting with unusual forms.

The works of Gleb Skubachevsky are the organisms of the species Anima Aliena — alien life forms once discovered by earth scientists. The artist puts the viewer in a situation of meeting with the Other, something that has nothing to do with Homo sapiens. The space-research topic gives the project a colonial perspective: how does a person relate to this organism? Studying and studied? Observer and observed?

‘It seems very interesting to think about life-forms that exist, existed, and maybe one day will appear somewhere in the Universe! Why not to model on canvas objects similar to extraterrestrial organisms? They are primitive forms of life. Some of them are animals, others are plants, and we will find them for sure! But how long should we wait for space expeditions to other planets and other planetary systems?! I am tired of waiting: I create my own world and begin to populate it with incredible creatures!’ (Gleb Skubachevsky).

In 2016, he entered the Top 100 recognized young Russian artists according to INART magazine. He is a two-time winner of the UNESCO award for participation in art symposiums Patras Art Fair and the Athina Art Fair.

His works are in private collections in Russia, the UK, Montenegro, Greece, Italy, Slovakia, Switzerland, France, Brazil and Hong Kong.

GIVE ART TO THE CITY, Severyane Restaurant, Moscow, Russia

A POSTERIORI / FROM THE NEXT, 4th Ural industrial Biennale of contemporary art, Ural Vision Gallery, Ekaterinburg

JUNE 22 , on the side of the human, European center of fine arts, Bratislava, Slovakia

YOUTH OF RUSSIA , The Central House of Artists, Moscow