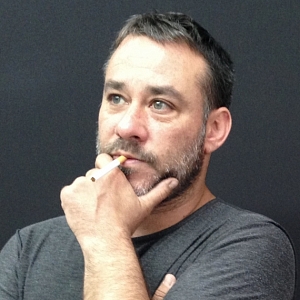 Born in Madrid in 1973, Palacios took up painting at his early childhood. At the age of 12, he joined of the studio of a famous Spanish painter Amadeo Roca Gisbert at the age of 12. He has received classic academic training and worked in an academic manner until he joined the Faculty of Fine Arts at the Complutense University in Madrid in 1991. He found his personal language during his education. In 1997 Palacios established the Laocoonte Art School in Madrid and for ten years combined teaching with working in various media - from painting to scenography, murals and posters for movies, as well as holding more than 20 personal exhibitions in galleries of Spain and Europe.

Palacios deliberately refuses to use canvas as a base for his paintings. He paints on drywall and transparent vinyl. His paintings dwell on such concepts as instability, restlessness, mourning. The works from the famous "Wounds" series capture a whole range of human states. It can be fear, joy or sadness. He mixes academically-depicted images of men and women with richly textured drywall and creates paintings in which life is shown in a certain confrontation with the power of time. His characters appear out of the vast of background literally piercing the viewer with a pure captured emotion.