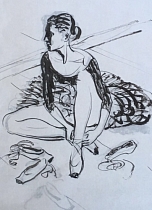 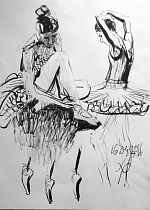 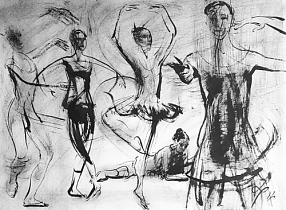 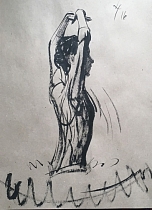 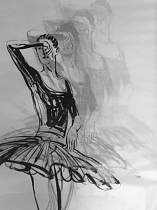 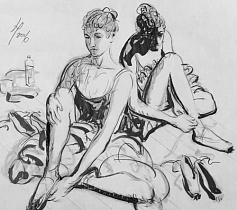 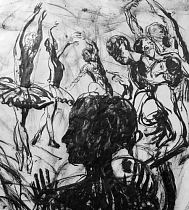 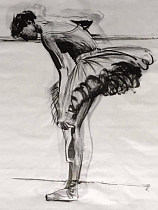 Askeri Gallery opens the fall season with the exhibition "Choreografics" by Andrey Remnev.

Probably, Andrey Remnev can be named "Russian artist" not only by geographical reason. He finely works with motives of Russian culture. According to the artist, his aesthetics is based on coupling techniques of ancient Russian icon painting, Russian painting of the XVIII century, the compositional findings of the artistic movement "Mir Iskusstva" and Russian constructivism. Remnev’s artworks combine main worldwide artistic directions (as, for example, painting of the Pre-Raphaelites or modernists) and aesthetics that are traditionally associated with Russian national idea (lubok, Russian avant-garde, the icon).

The new cognominal series of Andrey Remnev’s graphic works is introduced at the exhibition "Choreografics" in Askeri Gallery. The artist worked in the classrooms of the Perm Opera and Ballet Theatre and the Stanislavsky and Nemirovich-Danchenko Moscow Musical Theater, sketching ballet dancers during rehearsals. As a result, 17 graphic works, executed on tracing paper with Chinese ink, made the series "Choreografics" that gave its name to the exhibition.

The artist does not betray himself сhoosing the ballet as a main theme: some plots are influenced by E. Degas’ works, with his interest to the backstage life of dancers and non-centered composition. On the other hand, Andrey Remnev is closely familiar with the tradition of Russian ballet, finally formed under the influence of "Russian seasons" introduced by Sergei Diaghilev. Curious coincidence: Diaghilev, the founder of the artistic movement "Mir Iskusstva", finished gymnasium in Perm.

Andrey Remnev’s artworls are monochrome; the artist uses line as the primary expressive tool. Making a choice in favor of black and white, the artist focuses on the accuracy of the contour, dynamics depiction, catching the moment of movement. Some figures of ballerinas look just like the sketches; however, these works are characterized by harmony of the finished masterpiece.

Andrey Remnev graduated from the V. Surikov Moscow State Art Institute. Trained in Germany, worked in Cyprus. Studied icon painting under the guidance of p. Vyacheslav. painter in the Saviour-Andronnikov monastery in Moscow. Participated in numerous exhibitions in Russia and abroad. The artist's works are in private and corporate collections.