ASKERI GALLERY in collaboration with The Moscow Museum of Modern Art presents an exhibition of Kwan Young Chun, an internationally renowned South Korean artist. The exhibition will include key works by the artist created between 1994 and 2021.

Arranged chronologically on two floors of the large-scale exhibition space, the works represent the history of formation and development of creativity of the master, who managed to combine European and Asian culture.

The curator of the exhibition is Polina Askeri, who created halls with total installations, telling about the origins of the artist's work, as well as Vladimir Prokhorov (MMOMA). 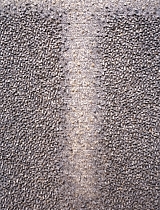 ASKERI GALLERY in collaboration with The Moscow Museum of Modern Art presents an exhibition of Kwan Young Chun, an internationally renowned South Korean artist. The exhibition will include key works by the artist created between 1994 and 2021. Arranged chronologically on two floors of the vast exhibition space, the works will present the history of the formation and development of the master, who skilfully combines European and Asian culture.

Initially, his style was influenced by American modernism of the mid-twentieth century, which Kwan Young Chun studied closely during his training in Philadelphia. However, he later decided to abandon the American artistic tradition, return to South Korea and create his own style, a unique synthesis of Western and Asian values. The tragic history of his native country, childhood memories, Confucianism and Western pragmatism gave birth to the series Aggregations, which has become Chun’s trademark.

Original art objects styled as wall panels are created from hanji, a traditional Korean paper that is made by hand from the bark of the mulberry tree. It has been widely used throughout Korea for centuries and is employed in various fields, from making all kinds of household items to works of art and author’s design. For his compositions, Kwan Young Chun uses old accounting records, love letters and fragments of philosophical treatises, which he folds into small triangles in a special way, where the text serves as both an ornament and a message. Thus, in the hands of the artist, the hanji sheets get a second life and his works are filled with new meanings. The author calls each piece formed from a fragment of this or that document a minimal unit of information. Assembled in an intricate composition, these bits invariably remind us of the importance of historical memory and at the same time call for renewal and reinvention.