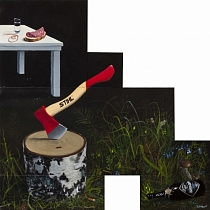 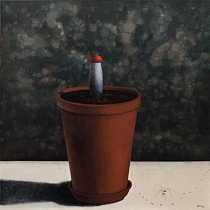 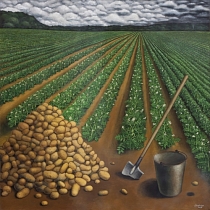 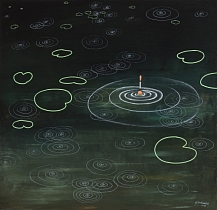 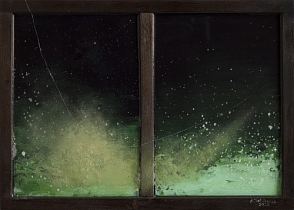 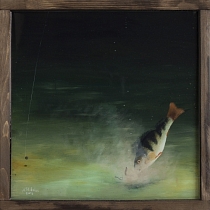 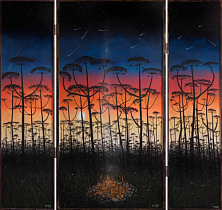 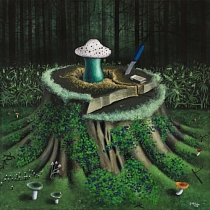 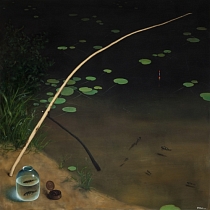 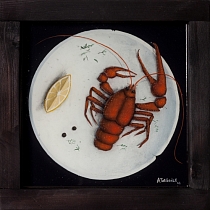 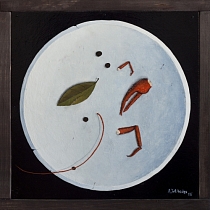 Anton Totibadze's exhibition "Folk Wisdom" is a series of new works on canvas and wood, dedicated to the fantasies about summer. The artist explores the world of the city residents’ values such as going in the countryside for a barbecue, gardening and swimming in a pond. Every city dweller can understand the joy that is usually absent in his daily life.
Anton Totibadze talks about his exhibition and its idea:

'Folk wisdom is a serious topic. It is the most powerful, formed over the centuries, the concentration of common sense, observation and ingenuity. It is the manual of the universe, if you want. But folk wisdom is not always words. It may well be a bend on the handle of the ax; a matchbox, filled with salt, or a bouquet of tansy in the toilet, repelling flies. On the right day, a three-liter can of beer, which you are drinking with friends snacking on freshly brewed crayfish can easily become such wisdom. These things, "magic stick", somehow surround us everywhere. Although there are definitely more of them outside the city. And when there are no energy to keep liking, to estimate taxi trips and to choose a next series, sitting at the computer with a plate of food, we still have an opportunity to depart from Mordor and to drink a glass of vodka, to snack salami, to go down the river, to cast a fishing rod, to catch ten perches for dinner; to put potatoes in a fire and again to drink. For love, for parents, for beauty'.

Anton Totibadze was born in 1993 in Moscow. He is the son of Konstantin Totibadze and the nephew of George Totibadze, two established artists. In 2013 he graduated from the Higher Academic school of Graphic Design, Boris Trofimov's workshop. In 2013 he took part in the exhibition at the State Russian Museum, and afterwards his works entered the collection of the Museum of painting of the XX—XXI century. From 2014 to 2015 he taught art at London Gates Education Group. Different galleries of Moscow and one in Tallinn organized five solo exhibitions of Anton Totibadze. His works participated in group exhibitions in galleries and museums, were exhibited at the fairs Art-Moscow and Cosmoscow. His works are in the collections of the State Russian Museum, the Museum of Organic Culture, in private collections in Russia, Georgia, USA, France, Latvia, Estonia, Germany, England.
His hobby is cooking.